Go to content
This is the story of Ombeni - one of our sponsored children
Ombeni was 11 when we first met him in Bagira village where he was attending primary school. We were shown his drawings of cartoons and his making of children stories in little books which he would sell to his friends for a few pennies. This was a child who had had no access to books, TV or education materials, and yet he was able to invent a story from scratch, and draw cartoons to illustrate it, very similar to the “Tintin “ adventure books. Each cartoon picture was painstackilly painted by him , with the most finite care and precision. It was amazing!
We were very impressed by his skills and we decided to include him in our sponsorship programme. Ombeni came from a family of 16 children ( his father was a polygamist and had left his mother in charge of 8 of them!) and had little chance of making it to secondary school or of achieving any of his ambitions.
Ombeni received the help of one of our sponsors, who subsidised his schooling for 9 years. He continued to excel in most subjects, including art of course, in which he was doing brilliantly. But now aged 21, Ombeni is a realist. He has decided not to become an artist because of the lack of real opportunities in his country, and the need to survive and eat on a daily basis, rather thanto achieve fame.
I met with Ombeni during our recent visit in December and was delighted to see what a confident and mature young man he had become! This is what he told me:
“ I am now in my second year at university where I am studying for a management degree in social organisations. I am grateful for the help I continue to receive from Congo Action , since my mother would not have been able to pay for my secondary school, and university was out of the question. I am still passionate for art and I design and paint publicity posters for shops and small businesses. This provides me with a little money to supplement my studies and living expenses.
I also do voluntary work as a “defenseur des droits de l’enfant”, running youth groups and discussions to raise awareness on children rights. I want other young people to benefit from the education and knowledge that I have been fortunate enough to receive....”
Ombeni is a young person with skills, dreams and ambitions. In our "civilised" world, he would have most certainly won a scholarship and perhaps be on the road to fame by now. But this is the DRC, where education matters less for the state, because they have other priorities. Ombeni is always going to be limited by the lack of contacts and opportunities in his homeland. Congo Action has taken him some of the way out of a doomed poverty, and it is difficult to create opportunities for him.  However, the confident smile on his face indicates a sense of pride and achievement , so somehow I have a feeling that he will be part of those who will want to change the face of Africa, little by little........ 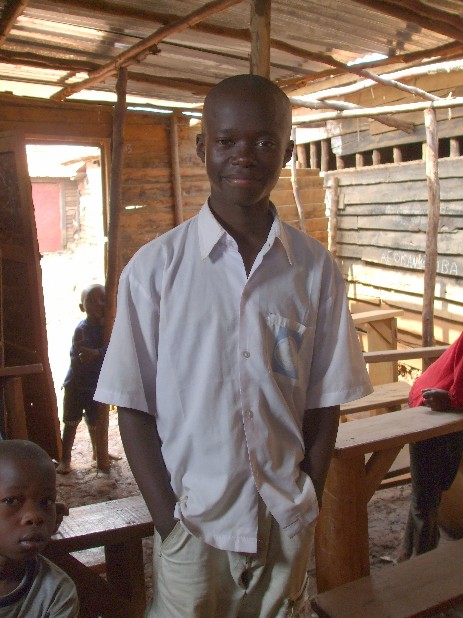